I have absolutely no idea how to spell it, but I can tell you what it means (thank goodness for spell check).

In the world of mental toughness, I train lots of sales people that are living in fear.  They're afraid of things like failure, rejection, acceptance, embarrassment.  The list is long.....

As humans, it's totally normal to be afraid of things.  Take snakes for instance.  Do you know ANYONE that's NOT afraid of snakes??

These type of fears normally originate from a bad experience you had as a child and/or stories you heard from someone that had a bad experience.  Either way the result is the same.....

You do everything in your power to avoid the fear. 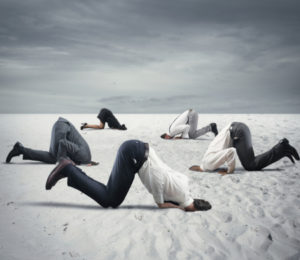 In the event your fear is of something that's easily avoidable, it's not a huge deal.

Stay away from the woods and you'll likely avoid snakes.

But in the event your fear is of something that's less "avoidable", it's not as simple.

I'll give you an example.  My daughter has a friend that's absolutely horrified of oranges.  Like, uncontrollable crying and trembling at the site of one.  Unfortunately, totally avoiding oranges is very difficult for her.

This is obviously a VERY extreme scenario, but the end result is the same.

Her life is controlled by a fruit.

Although many of us will laugh at the fact she's petrified of a fruit, it's a serious fear and she does her best to control it.

By using systematic desensitization, she could slowly and "systematically" "desensitize" her brain to her fear of oranges.

In the world of mental toughness training, systematic desensitization is used to help with all types of fears, but there's one I deal with most frequently:

The fear of rejection.

Of all the fears I address with the people I train, the fear of rejection is by far the number 1 culprit.  Being afraid to get rejected when you're in sales is a very large problem.  It's like being a life guard but you have a fear of water.  And we don't just see the fear of rejection in sales.  Lot's of people allow this fear to control their everyday lives too.  The good news is, there's a way to fix it.

As the term states, my goal is to "systematically desensitize" their brain to the point where rejection (or any other fear), is no longer considered to be painful.  In the world of psychology, this is also referred to as "Graduated Exposure Therapy."

We slowly introduce whatever it is that's causing the fear and get the person to "gradually" experience the feelings associated with the event.  In small doses, the exposure is increased until they get to a point they no longer have a fear.  They instead begin to treat it like a game.  In the world of sales, this can make the difference between failing in their position, or becoming a leader in their position.

It's important to note that very rarely will this process work to totally eliminate the fear.

This isn't the objective of systematic desensitization.

The goal is to get a person to reduce their fear enough to where it no longer controls their life.  In terms of gauging the level of severity on a scale of 1-7 (1 being no fear and 7 being totally comatose with fear), we aim to take their level from a 6 or 7, down to a 2 or 3.  Even though the fear will still exist (and probably will forever), it'll now be at a level that allows them to step outside their comfort zone and accomplish whatever it is they want.

So I'll leave you with a critical thinking question to consider:

"Are you currently being held back from your dreams because of a fear you feel you can't overcome?"

If so, you may benefit from being "systematically desensitized".